Skip to content
Within the last 2 days TPWs, individually and collectively, have witnessed several styles and types of witnessing.
The most recent was 10 TPWs and 1 husband completing the Resolution Run on Sunday December 29th 2013. This run, for most of us, is an annual event. Most went for breakfast.  The celebratory witness. 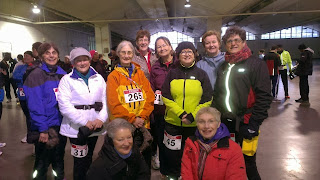 The day before the Resolution Run we gathered at the cemetery.  2 runners flashing by us informed us that yes there was black ice but all was well. So what did we do? We walked. Somehow the contradiction of black ice and all was well made sense to us. In hindsight it still does. Cognitively, I agree, it is a contradiction. Well truth be told it is a huge contradiction…..still, in hindsight, it made sense. The athletic hearsay and the athletic sensory witness.
At breakfast it was mentioned that the cemetery looked as though it had been through a war. It did. Limbs of trees were hanging everywhere. The white tree flesh, where limbs of trees had been torn off, was visible; some of the tree flesh was scattered throughout the cemetery.  Several of us who had walked for years in the cemetery agreed that this was the first time that we had seen the cemetery looking so ravaged. The eye-witness.
What also occurred within the last 2 days was Helen giving each person there a DVD.  When you watch the TPW DVD Helen created, you will witness historical photographs. Thank you so much Helen and those who also provided her the pictures. The historical witnesses.
So witnesses past and present
Three Cheers and Hip Hip Hooray
Watch out 2014