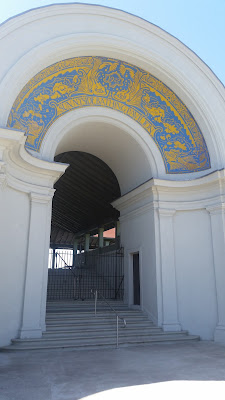 It was really hot walking on Saturday even down by the lake. Heading east in the early morning I was quietly dreading the return trip, an hour and a half later.

But I couldn’t complain because Michael had already walked 6k even before I started, and was walking another 24k as part of his training for his first marathon as a power walker.  We walked east, past Ontario Place, past the ‘washrooms’ near Coronation Park, past the Music Garden, past Queens Quay, past Sugar Beach and started walking down Cherry Street, when it was time to turn back. Hallelujah!

Like a horse heading back to the stable, my pace quickened. Having just consumed a gel for energy, and turned on my music, I was on my way back! What also quickened my step was the thought of cooling off in the Sunnyside swimming pool at the end of my walk.

I knew that bathing at Sunnyside has been an attraction for Torontonians for over 100 years, although originally bathing was only in Lake Ontario. The Sunnyside Bathing Pavillion as I later learned opened in late June 1922 as a place for patrons to change into their ‘bathing costumes’ to swim in the lake.  I’m not sure if the pool we swam in on Saturday is the original one built in 1925, but I do remember it being renovated in 2010, and closed most of the summer. On Saturday, it was heaven!

We cooled off in the pool, some walkers were ambitious and swam multiple laps.  I was content to lie in the cool water and bring my body temperature and heart rate back to normal!

After a short dip in the pool, we had brunch at the Sunnyside Cafe where only a few weeks ago a group of us ate heartily and felt like we were on a tropical vacation. The magic still held this week too.

What started out as a hot and humid walk along the lake, ended much more pleasantly having enjoyed a refreshing swim in a place that many Torontonians have been coming to for 100 years.

The photo below was taken in the 1940’s, likely
from the Sunnyside Bathing Pavillion,
looking east to the beach and the pool.