Skip to content
Most years, the TPW heads to Toronto Island for our Saturday walk on the Molson Indy weekend to avoid the noise and fumes on the Lakeshore.  We don’t think we did it last year, because the Indy wasn’t here due to the PanAm games.  But none of us is sure!
We met at the Jack Layton Ferry Terminal at 7AM and at 8AM, depending on our distances (and ability to get up early in the morning.)  The distances varied from 10 km to 26 km.
The second shift (Mary, Barb, Sue, Diane, Danielle and Sherry) docked at Hanlon’s Point on its way to Ward’s Island.  Phyllis, Ann Louise and Michael arrived at Hanlon’s Point just as the ferry docked and was able to wave the second group off the ferry to join us for the walk back to Ward’s.
The air was crystal clear because of the lack of humidity so the views of Toronto from the island were stunning.  It was pure pleasure to walk a route that is known, but not routine; that is familiar but has new elements added.  Several people commented on the holiday atmosphere inspired simply by being on the island. Waffles at the outdoor café seemed an apt celebratory meal for our holiday before the ferry ride back to the city. 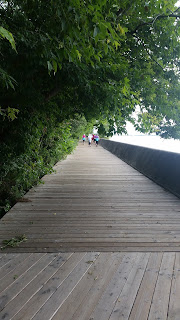