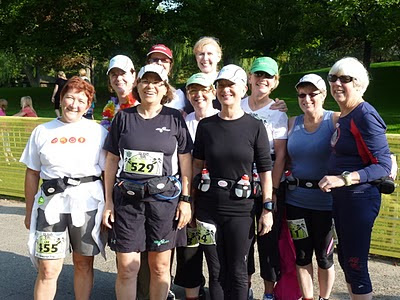 Sunday morning was absolutely sparkling on Centre Island for the start of the Island Girl Half Marathon. Ten TPW members (Barb, Bev, Laurel, Lee, Margie, Mary, Shelly, Sherry, Sue, and Susan) crossed the start line, looking strong, at 9:35. This was remarkable because more than half of these women were recovering from injuries. The will and determination they showed was inspiring.

They had their very own cheering section. Jeanne, Susan’s sister, brought her bicycle to be able to move along the route to cheer on the group. Ron was there to encourage Bev on their wedding anniversary. Phyllis, as always, was there to support. She walked a good portion of the race with some of the entrants. Rorie and Carol, nursing foot injuries, cheered from strategic intersections. And I was just pleased to be with such an energizing group of women.

All of these fabulous females finished the race upright and smiling and  TPW members took the top four spots in the walking entrants. Congratulations to Bev, Laurel, Sherry and Shelley and to every one of the TPW’s for showing how it’s done. They followed in Ela, Phyllis and Mary’s footsteps who were the top 3 last year.