Skip to content
You read in last week’s post that all of the TPW were successful in their races, some with blistering times (Jo Ann), some who managed to get across the line standing up (me).
While in Reykjavik, we took in a spoof of the Icelandic Sagas, which turned out to be remarkably informative as well as entertaining.  The Sagas are the tenth, eleventh and twelfth century histories of the farmers who settled Iceland.  They were a remarkably blood-thirsty lot, with the central theme of each saga being avenge, revenge, avenge, etc.
The seven TPW members had their own saga.  In addition to completing the race, we managed to stay up for Iceland Culture Night, culminating in fabulous fireworks.  Over the days we were on the island, we journeyed to Black Beach to see the puffins just before they migrated for the winter.  We saw historic sites, beautiful waterfalls, glaciers and volcanos.  We stood on the Mid-Atlantic Ridge between the European and North American tectonic plates.  We tasted fermented shark (which I can’t recommend.) We floated in The Blue Lagoon. (which I can recommend). 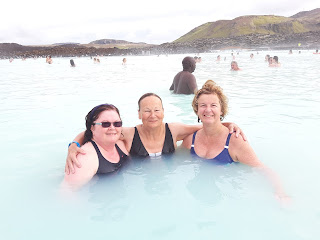 Like the Vikings, we feasted, often on oat cakes.  Unlike the Icelanders of saga, we drew no blood.  Instead we thoroughly enjoyed our companions AND the cool weather.