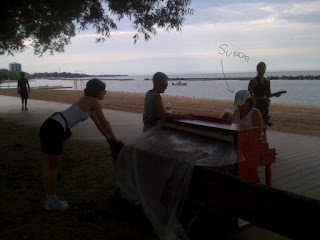 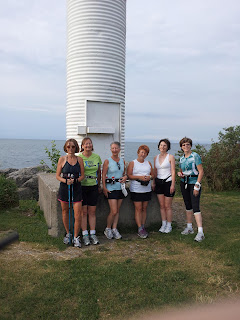 If I was to compare my activity level last week to a temperature I would (hot being very busy) state that I felt I was in a desert with the sun pulsating down. It was just one of those weeks. Thank God for my morning rituals.
Yesterday, being a few minutes late, I decided to walk through the High Park zoo and meet up with everyone at the cross roads.
I observed a person with a small child walking at the child’s pace. Some of the sheep and emu came to the fence line to observe me. People with children on the back of their bikes and others with children walking around them; all appeared to be moving extremely slow.  Just out of curiosity I slowed down and I noticed my senses starting their process of replenishment.
Seeing no one from the TPW group at the cross roads I decided to return to the zoo and my senses again welcomed the sights, sounds, and yes even the smells of the zoo. My pace by this time was extremely slow; a pace that would usually annoy me. By the time I walked twice up the hill I had seen several small children smiling and talking; a sheep on top of the roof of a hut; peacocks with wings fully extended; a yak with its two front legs in a very large bucket of water; adult people walking at the pace of the children; no one talking on cell phones; no technology; animals with their noses near the fence for people to touch them and then a realization occurred. This was an oasis in my desert of high activity.
Feeling somewhat replenished I left the oasis and went to the waterfront in search of TPWs.
As I walked under the cracked, gouged out, graffiti written walls of the bridge before getting to the waterfront my mind translated the given reality which I could not ignore.   I knew that the graffiti was evidence to territories being carved out for illegal gain and that the bridge’s gouged out cracked decor reflected the cities economic situation. Oh yes, I had definitely left the oasis.
It happened that I who went to search for members of the TPWs was found. Some of the members found me sitting at one of the pianos on the water front attempting to play a tune (I definitely have to return to the Conservatory).  After pictures were taken we finished our walk together.
We Toronto Power Walkers do create our own oasis. Yet there are times when the oasis of friendship (for whatever reason) is not present.  When that occurs I suggest to walk the distance, at the pace of a child, out of the desert of activity to the High Park zoo; an oasis in Toronto may await you there .