Skip to content
I arrived at the gates to the cemetery to find a few folks waiting outside.  There was a certain sense of fatalism as we considered that security had locked us out because it was too slippery to walk.  As a few more TPW’s joined us, we considered our options.  Our usual restaurant wouldn’t be open yet.  Should we do a bit of treacherous street walking or go to Tim Horton’s?
But, just as we were about to turn away, security arrived to open the gates and assure us that the walking was not bad.  We started off, tentatively.  Those in front determined that the first hill was too slippery so we made a detour and did our walk on the main roads only.  It really wasn’t too bad for those of us who had some kind of traction device.  Those who were walking without had to be very careful.  Nicole decided to do the one hill near the gate over and over till we returned. 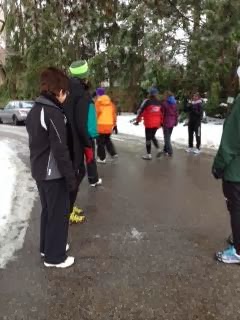 We only walked 2.6 km and the pace was certainly not quick.  But we were happy to have been outside, the rain hadn’t started and we headed off to breakfast where Nicole provided scrumptious home-made treats.
This afternoon I watched the retrospective DVD  that Helen made with over 600 pictures of our 5 years of PowerWalking since 2009.    That certainly made me feel warm despite the rain outside my window.  She’ll bring them to the tea in January for all
.
Happy Holidays to all!