Skip to content
What a beautiful weekend!  I cheered at the Sporting Life 10K this weekend. I walked back of the pack for the Yonge Street 10K 3 weeks ago. Same course different perspective.  I stood just north of Bloor Street with my sign, cowbell and coffee.

I arrived only to see Diane and others pass me quickly. They were moving fast. I realized then that I should have arrived earlier or cheered at Dundas and Yonge.  I saw others seconds later only to pass very quickly, first high five of the morning was from Sue Chesworth.
It was a warm morning and I have to say I was happy to be on the sidelines
I was surprised to see runners/walkers with their jackets on and warmer than needed clothing. Thankfully we learned early what to wear to make the races and training more comfortable. I know I could have worn less as a spectator/ cheerleader. 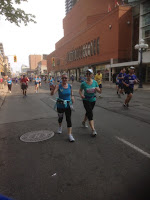 What I noticed the most was the smiles of nearly everyone on the course. It was infectious. I saw a friend on the course , Debbie was running with two friends. I was so happy to see her having fun. It was just last year she lost her teenage son to suicide. Running with friends helps her move forward and I am happy she has that in her life.  I know the power of training with friends and doing races.
I saw one man walking aided with a cane. I saw many couples of a certain age walking down Yonge Street holding hands. There were many many runners, walkers behind the Toronto Power Walkers and those who read the sign probably wondered who Toronto Power Walkers are?
The bottom of the sign mentioned breakfast ahead, that made a lot of the participants laugh or smile. One runner called out her coffee order to me.
I was inspired this morning, my last race as a participant was Chicago Marathon. It’s time for another race, so I registered for the Collingwood half in October when I got home.
I cheered until the last participant passed me, it was approx 10:30 and they moved to the sidewalk just north of Bloor St.  I knew for them the next 5.5K was going to be long,but worth it.
My bristol board sign was wilted and my hair frizzy but I had a big smile on my face.
I didn’t do the race but for an hour I was part of it in a small way.
Try it sometime if you haven’t experienced cheering  at a race
My daughter asked why I was doing it and I said to cheer on TPW’ers  however today I cheered a thousand all behindTPW’ers
Congratulations !!!!